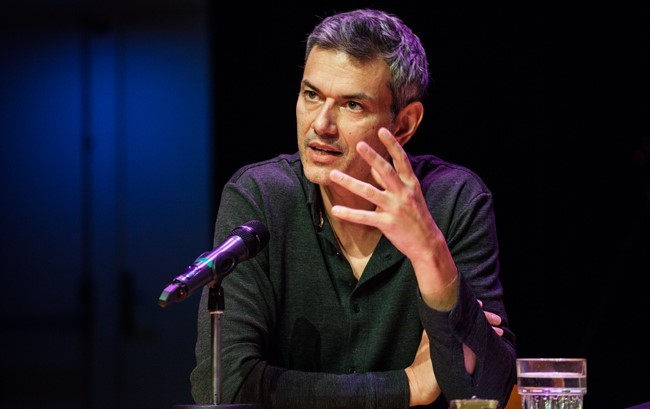 Movement in the pause: choreopolicing, “expressing oneself,” and the pandemic. - A CONVERSATION WITH ANDRE LEPECKI

In this online edition of the Terrarium Talk, PhD candidate, Sofia Caesar will moderate a conversation between André Lepecki and the audience. This event will be live streamed on 10 March at 5 pm.

André Lepecki is Full Professor and Chairperson at the Department of Performance Studies at New York University. Editor of several anthologies on dance and performance theory including Of the Presence of the Body (2004), Dance (2012), and Points of Convergence (with Marta Dziewanska, 2015).

Author of Exhausting Dance: performance and the politics of movement (2006, published in thirteen languages), and of Singularities: dance in the age of performance (2016). AICA-US award “Best Performance” 2008 for co-curating and directing the authorized redoing of Allan Kaprow’s 18 Happenings in 6 Parts (a commission of Haus der Kunst 2006, performed at PERFORMA 07).

Sofia Caesar is an artist from Rio de Janeiro, Brazil living in Brussels.
Caesar's work is rooted in dance practices and somatic procedures that evoke physical states between activity and passivity, work and rest, movement and pause. Her universe of work activates the body: it often proposes stillness as an active physical state or elaborates on the bodily effects of technology, productivity, and work.

In the past years Caesar has exhibited at institutions such as the Transmediale (DE) Moscow Biennial (RUS), M HKA (BE), SFMOMA (USA), A Tale of a Tub (NL), Tomie Ohtake Institute (BR), Centro Hélio Oiticica (BR), ISELP (BE), Brugge Triennial (BE), WIELS (BE), Beursschouwburg (BE), amongst other organisations in Belgium and the world. Caesar is currently a PhD candidate at Luca School of Arts, Brussels within the Intermedia Research Unit, cluster Photography Expanded.