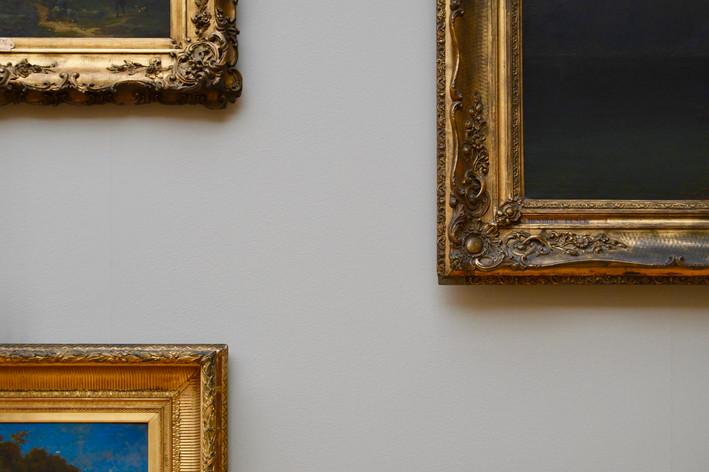 Solo exhibition of doctoral researcher Gianluca Cosci, presenting a selection of his most recent production consisting of paintings, photographs, and modified ready-made artworks.

Gianluca Cosci could be inscribed within a context of artists whose works include some form of visual reduction and obliteration which, nevertheless, opposes the notion of 'nothingness': rather, this idea has the ambition of highlighting the richness of the perceived visible through elusive suggestions and ineffable features on a surface that simultaneously conceals and hints the visual forms. This apparent dichotomy implies a sort of understated aesthetic, along with a sense of destruction that is the main characteristic of Gianluca Cosci’s eclectic artistic practice.

Iconoclasm was indeed the starting point, in 2019, for his doctoral research in Fine Arts within the Image unit under the supervision of Dr. Peter De Graeve and co-supervision of Dr. Bart Geerts (The Denied Image: Art Interventions between Iconoclasm and Institutional Critique). Cosci has been pursuing his Ph.D. by combining intensive art production in his studio in Molenbeek with the study of numerous scholars and artists dealing with the problem of destruction in the context of contemporary art and its inherent contradictions such as iconoclasm/iconophilia, creation/destruction, visible/invisible, manifest/hidden.

The element of violence and destruction intrinsic in any iconoclastic actions, in Cosci’s work seems, nevertheless, to be taken over by an almost aesthetic longing to hide (part of) previous images so as to make that image visible (to turn it into an object for contemplation) and to use it as a kind of substrate for something new to appear or happen, which Arnulf Rainer appropriately defines as Geheimnis or 'mystery'. In this sense, the focus is on the process of deliberately creating – or rediscovering – of a palimpsest, a plinth structure, a device that allows the creation of newer images using a modus operandi of 'creative destruction'. Moreover, in the case of Cosci’s work, the artist acts almost as an external agent who overpaints, during successive moments, on both his own older paintings and on ready-made artworks.

Usually, those interventions occur several years after the original works are completed. In this way, the temporal distance between the 'completed' painting and the final intervention creates an essential detachment necessary to obtain an emotional separation from the initial work, which almost becomes somebody else’s creation. Therefore, the newer interventions act as 'reactivators' of the older surfaces but also as forms of censorship or negation. Those 'concealments' could be clearly interpreted as forms of suppression or disavowal but, at the same time, they invite a more intimate and silent contemplation, as the underlaying painting becomes visible only partially, under the layers of paint.
This sort of veil or 'window blind' could be seen as a separation, a limit that prevents a supposedly clearer vision in favour of another, more transcendent one. One can only presume or visualise an 'image' metaphorically draped in a painterly shroud that both reveals and conceals various elements according to the density of the painting itself. In this way, the 'restricted view' of the painting is at the core of an image finally and completely exposed to the viewer.

The vision is, therefore, always partial, blurred or restricted as in the case also of Cosci’s photographic works. The visual hierarchy is, thus overturned by hampering the sight of specific areas of the image, subverting the original intention of what is worthy of our attention, what is precluded, highlighted or hidden. In this new redirection of the gaze lies a creative freedom that contemplates the possibility of the negation of the image itself. This visual denial can have an evocative effect that might even highlight the “left out” elements.
It could be said, therefore, that the 'latent' is at the core of Gianluca Cosci’s artistic production in its various declinations: cancellation, negation, concealment, obliteration, denial, elimination and so on; each term has certainly its own specific meaning and nuances but within a common, iconoclastic ground. Probably this word is indeed the karstic leitmotif generally present in his practice in various artistic forms and media but always somehow with the same corrosive and harsh spirit, occasionally even with a silent anger unable to fully articulate and restrain itself

Gianluca Cosci completed a BA in painting at the Accademia di Belle Arti of Bologna. He also obtained Masters' degrees in Fine Art at Chelsea College of Art and Design, London, and in Art and Design in Education at the Institute of Education, University of London.

He has taught fine art and history of art in several institutions such as H.I.S.K., Ghent; Kensington and Chelsea College, London; Committee of the Regions, Brussels.

Since the 1990s he has been exhibiting his works internationally, both in institutional spaces and private galleries.

This project was realized with support from the #LUCAbreakout fund. LUCA School of Arts pools resources to support students, researchers, teachers and employees willing to put LUCA on the map. A central budget provides low-threshold support for well-defined initiatives.