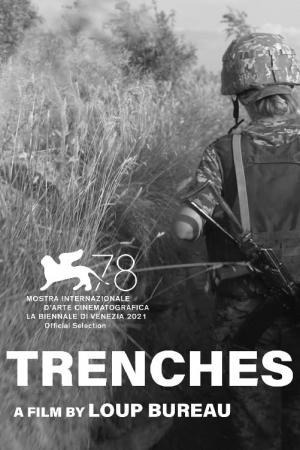 Trenches and stylized black and white photography. It feels as if we are being catapulted back to the last century, but alas. Since 2014, Ukrainian soldiers have been fighting pro-Russian separatists while diplomats - nowhere near the frontlines - negotiate precarious ceasefires. Experienced war journalist and photographer Loup Bureau spent months documenting life in the Ukrainian trenches just a few miles from their enemy.

At first sight, Trenches' footage resembles war images from the first half of the 20th century: the black-and-white cinematography, the old-fashioned aspect ratio typical of the 1930's. But these images are misleading. This is about a contemporary reality for young Ukrainian soldiers not very far from here. With organic one-take sequences, Bureau perfectly captures the repetitive and banal, as well as the terrifying aspect of their daily lives. The soldiers dig and re-dig the corridors and shelters, wait, cut each other's hair, play with cats, chat, cook, sweep and play a fantasy war in a video game. Until life is interrupted by real shootings and grenade attacks. People are injured and sometimes die. It is only when they return home that the impact of these experiences on their lives sinks in.

In light of the recent events in Ukraine, DOCVILLE and DOCNomads have decided to donate all proceeds from the screenings of Trenches on 23 & 27/03 to The Voices of Children Foundation which has been providing humanitarian aid and psychological support to the children affected by the war since 2015. We're hoping for a big turnout to support the people of Ukraine during these tough times.