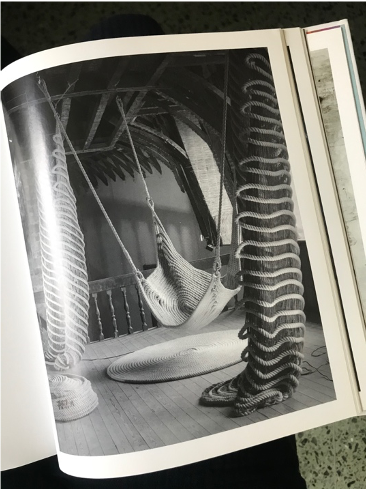 Born in 1926 in Poland, Tapta (pseudonym of Maria Wierusz-Kowalski) arrived in 1945 in Belgium. She studied visual arts and weaving at the National Higher Institute for Architecture and Visual Arts in La Cambre in Brussels, where she graduated in 1949.  Soon after, she and her husband Christophe Wierusz-Kowalski moved to Congo, where they lived from 1950 until 1960. Upon their return to Belgium, Tapta became quickly known as one of the most important members of a new generation of artists engaged in re-defining sculpture through the use of threads and textiles as true sculptural elements. She called her work sculpture souple (soft sculpture), which corresponded to her constant search for an expanded notion of sculpture that included the fluidity and tension of threads. In 1975, Tapta became Professor in charge of the tapestry workshop at La Cambre. Amongst her students were Ann Veronica Janssens, Monica Droste and Marie-Jo Lafontaine. Tapta died in 1997.
Despite her intriguing biography, innovative work, and influential role as a professor at La Cambre, the oeuvre of Tapta has never been extensively researched so far. This impulse project aims to, first, explore and partly disclose the archives of Tapta, and, second, establish a dialogue between the (historical) work of Tapta and contemporary art practices, more specifically that of Hana Miletić and Greet Billet. Together with Liesbeth Decan these artists will study the archive and oeuvre of Tapta, and, from there, produce new works as well as texts.